I’ve been on a mad painting spree these last few months, and we’ve actually started framing and hanging some of them in the house.

What simultaneously amuses and befuddles me is that I never know which of my paintings my wife will deem “hang-worthy.”  Having made some horrible design choices in the past, we’re both pretty picky about what goes on the walls.  So I’m always pleased when I accidentally crank out a hang-worthy painting.

See a trend as to where my paintings end up?

But then these others are sort of homeless right now.  This one was tucked on a bookshelf:

And this one started a series of landscapes (which I feel like is one of my weaker suites, so I’m doing  a lot of these lately trying to improve).  This one might get hung:

Jennifer has made it clear this one WON’T get hung.  So it’s in my closet right now:

Did this one on Good Friday.  Not the best photograph, but I call this “Behold your Mother.”  Pay attention to the right-side edge of the painting.

And I did this one yesterday on Easter Sunday.  These last two I did on my front porch, and very much enjoyed being outside doing these instead of being in the basement, but it’s not the most convenient thing to haul all my gear upstairs and outside.  But it’s worth it.  More to come!

The above video was shot from February 11, 2014 through tonight, March 30, 2014, but the process began way back in December when I first had the idea of doing a painting based on a stained glass image of the Wedding Feast of Cana, which is one of my favorite stories from the Bible.

As I searched around for stained glass images, I came across one from the Cathedral of Sts. Peter and Paul in Providence, Rhode Island. Talking to my friend, Fr. Jay Finelli, a priest of that diocese, he believes the windows are as old as the Church, which is about to celebrate it’s 125th anniversary. Thus far, I have not been able to discover who created the original stained glass design.

Nevertheless, while the layout of the paintings I did is similar, there are so many things that are different, and areas I took liberty with the paintings to make them more in my style.

The new view when you first walk into our house

But more importantly, these two paintings did so much to help revitalize my desire to use my creativity in a more prayerful way. I wrote about my growing in this area in a previous post.

Just after finishing the second painting

I definitely felt God’s peace and guidance through this work. There are a few aspects of the paintings that I have no idea how I pulled off, and I attribute those areas in particular to the Holy Spirit. I also attribute the spin-off Mysteries of the Rosary series (still in progress) to the Holy Spirit’s inspiration, as well.

I’ve been very blessed to rediscover this hobby after so many years. It’s hard to adequately give words to how it has changed me in such a short period of time. I feel a tremendous peace when painting that transcends just a relaxing hobby. I feel a connection with God and an appreciation for the gifts – big and small – that he gives us.

I suppose it’s appropriate that his first public miracle – his first gift to the world – would be the my first big project upon returning to these creative endeavors.

First, A Progress Report
A few weeks back I wrote about a new painting project I had started. I’m about 75% finished with that one. Here’s the progress so far:

Those are actually two separate paintings (thus, my wife Jennifer holding one of them) that tell the story of the Wedding Feast of Cana, which is one of my favorite stories from Scripture. It is based off of a stained glass image from the Cathedral in Providence, Rhode Island. Never seen it in person, but liked some of the photos I’ve seen enough to do my own version. When it’s done, these two will be framed separately and hung on the living room wall that has been completely blank for far too long. Like this:

The project has been a great challenge (in a good way) to re-awaken a lot of dormant understanding of painting.

Unexpected Surprise
One of the things that was driving me nuts is that sometimes I end up having to mix a lot of paint just to get a little bit of color on the canvas leaving me at the end of a painting session with a pile of unused and unneeded paint. And since I’m now painting with acrylics instead of oils, the paint dries super fast.

One night, further inspired by Pope John Paul II’s Letter to Artists, I had the idea of grabbing a spare, smaller canvas and just seeing what comes out of the brush by using the spare paint from that night’s painting session.

This was the result:

Surprised by the result, I’ve since continued doing these #SparePaintPaintings whenever I have leftover paint at the end of the night. I’ve now completed 16 of the 20 mysteries of the Rosary.

We’ve talked about the possibility of having prints made of these either individually or as one large collage, like this:

So here’s the question – Would you be interested in prints like this? It would require a bit of investment to have HD professional photos taken so that the prints would actually look like the original. And do any other artists out there have an idea how much things like this run for?

Here are some others I’ve done so far. Can you figure out which mystery each represents?

I know what this is going to be, but I’m not going to tell you just yet.

Can you guess what this is going to be?  Post your answer in the comments below and I’ll send something cool to the first person to guess correctly before I upload the next updated picture.  Better hurry.  I’m making progress… 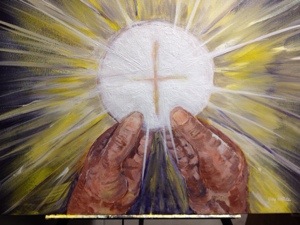 I started this painting a few weeks ago and finally finished it yesterday. My oldest son, Sam, asked me what I’m going to call it and I had no idea. I asked folks on Facebook for suggestions for a name and there were a ton of great ideas. Post your suggestions for a name in the comments below! Also, I’m not sure what to do with this. I’ve never sold any of my works and I feel kind of weird even thinking of doing that. Anyone have experience selling or auctioning off something like this?

After the leaf painting from last week, I started a new one.  Here’s the very first foundation: And here it is after the first coat on the hands: 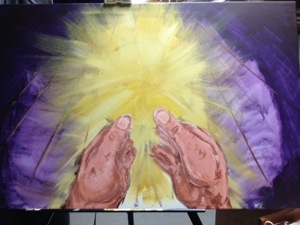 I doubt this one will end up on the wall, either.  Jennifer likes artwork that is somewhat nebulous, where you have to gaze at it a bit to figure it out.  My Catholic readers can probably figure out where I’m going with this.

The summer before Jennifer and I got married, I went on a mad-dash painting spree. I wanted our apartment to have cool artwork on it and did some rather cool paintings, if I do say so myself. I did two portraits of Ernest Hemingway (which I’m not even sure what happened to), one of Jennifer (which I think is in her closet), and a portrait of the two of us (which is now in basement), and a couple other random paintings. They were all done in oil on canvas, and it was the first time I’d done anything like that. But because of my long history of drawing, the process came fairly easy to me.

But then came children, and spending hours painting, plus having turpentine around to clean the brushes, didn’t seem like a good idea.

Now, after a 16-year sabbatical from painting, Jennifer got me a new set of brushes, an easel, a couple canvases, and a bunch of tubes of paint (this time in easier to clean acrylic).

Whereas I earnestly jumped into painting 19 years ago, now I was a bit trepidatious to start again. Even though I like the paintings I did before we got married, looking at them now I see all sorts of weaknesses and shortcuts.

But do I paint for fun or because I’m an expert at it? That’s the question I now ask. I’m no longer under some self-imposed deadline of creating a bunch of paintings to decorate the house. Instead, I highly suspect that most of what I create now will end up gathering dust in the basement. Instead, I’m trying to approach art as an exercise in letting the Holy Spirit work through me if He wants to, and otherwise just enjoying the process of creating if He doesn’t.

So far I’ve finished one painting and started a second. The first was on practice board (wish I’d used actual canvas now). The second is on a 24×30″ canvas.

The first painting was of a tree. I thought I was finished when I got to this point: After a few days and much thought, I did this to the tree: As you can imagine, I was a wee bit nervous when I painted over such a large part of the tree.  What I did different the second time around was to actually paint the branches on the top,  even though I knew I’d end up painting over those.  In the end, this was the final result: I was much happier with the final product.  But I’m still intimidated by painting those stupid leaves.

Here are the two versions side by side (I also ended up expanding the trunk a bit since the mass of the leaves ended up being greater): As I made the corrections, I decided to make a short video of the process: